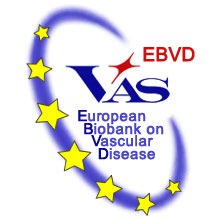 BRIEF PRESENTATION OF THE

The Biobank is part of the BBMRI.

Based on previous experience, the essential prerequisites for a European Vascular Biobank are:

Centres’ compliance, quality and ability in recruitments of PAD patients was tested by means of a previous project (called European Databank on PAD patients). More than 3,500 patients were evaluated all over Europe through a questionnaire and standardised procedures.
Based on the above quoted prerequisites and on the results of the previous projects, the EBVD has been thought to meet the characteristics resumed in the following summary:

– a European Biobank;
– part of an independent Foundation, but with close links with the Universities and European bodies
– no-profit

– tried and tested co-operation among Angiology /Vascular Medicine Centres
– guarantee of quality and consistency between the centres concerning the patients selection, diagnostic criteria and the collection of data (tried and tested in earlier research activities)
– indissoluble link between the biobank and research, and clinical activities and training
– involvement of Patient Groups

– a fully centralised organisation and complete meeting of any cost;
– direct follow-up

Finally, EBVD can rely on:

– Ethical guarantees (VAS Ethics Committee and Guarantors Committee, BBMRI, European and National rules/documents)
– Compliance with all the necessary criteria for a Biobank in the vascular area as indicated above
– BBMRI’s network

WHAT DATA ARE SUPPORTING THE EBVD?

PAD represents a chronic disease in progressive spreading especially because of the increase of the average age, it also is a high-risk pathology for acute events/mortality, since the very first stages (asymptomatic).

Buerger, a disease of high social and human impact, needs research from etio-pathogenesis to therapy

HOW IS THE BIOBANK ORGANIZED?

VAS is centralised in terms of direction, organisation and coverage of expenses
>Centralisation of the material for submission to local Ethics Committees
>Well-tested training at centres and direct follow-up
Detailed on-line questionnaire at the Vas work portal (accessible with authorised ID’s and passwords for single researchers through VAS’ website).

VAS and the EBVD organisation allow us to grant the patients the anonimity of personal information on three different levels:

– The collecting centre will be able to backtrack the patient having all her information and personal data
– VAS’ headquarter will receive from the collecting centre (if there is not a different agreement, as mentioned before) the samples and the clinical data already anonymised (so personal information confidentiality is totally granted)
– Once stored at the Bio-repository the sample is only associated to a barcode which allows the trackability of the sample but no clinical nor personal information are sent to the Bio-repository.

Interested Centres, Clinicians or Researcher can join according to the following instruction.

If you do not have any samples from vascular patients yet:

If you already have any samples from vascular patients:

– by writing directly to the Scientific Coordinator, in order to compare methodologies, criteria and visions. Once the due agreements are reached, VAS usually proposes two different ways to collaborate:

In any case, joining the project, the samples (independently from their physical location) will be assumed and become part of the VAS-Biobank.

WHAT AM I SUPPOSED TO DO ONCE I HAVE JOINED THE PROJECT?

– Get access (ID & password) from VAS to the online reserved areas;
– Conform to VAS’ methodologies;
– Recruit of PAD-patients and Controls;
– Questionnaire file;
– Blood-collection through the supplied kit and according to the given instruction;
– Shipment of the sample by means of a currier supplied directly from VAS on simple request;

All costs will be met by VAS, no fees are to be paid by the collaborators.

WHAT CAN I FIND AT THE EBVD?

– Detailed anonymous data of Patients and Controls;
– Stocking of:

IS THE COLLABORATION LIMITED TO EUROPE?

VAS is mainly European, but cooperate as a Worldwide organisation: in continuous agreements with non-European Centres,  considered fundamental for the development of training and research.

This collaboration works also on VAS-Vascular European Biobank and on EBVD-EBPp.
Criteria to participate are the same here above mentioned.

HOW CAN I KNOW MORE?